Tom Hunter’s new book, Down the Lane, will be launching at The Cass, London

Tom Hunter’s new book, Down the Lane, will be launched at The Cass in London. 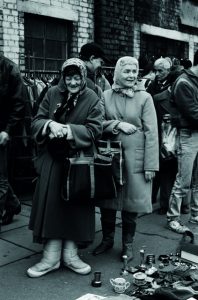 The East End Archive at the Cass announces the launch and book-signing of the newly published Café Royal Books Box-set on 26 March 2020 in the Calcutta Annex, Old Castle Street, London E1 from 6-8.30pm.

The box-set comprises four books made for the East End Archive, each representing work made in London’s East End during the 1970s and 1980s by the renowned photographers Tom Hunter, Brian Griffin, Diane Bush and Mike Seaborne. The majority of this work has never been published before with the exception of Brian Griffin’s, for which it is the first time within a documentary context. Each book has been edited specifically for the box-set publication, which is a special collaboration between Café Royal Books and the East End Archive, both of which have a similar ethos regarding the cultural importance of the preservation and dissemination of British Documentary Photography.

Each photographer has taken a distinctive and personal approach to photographing the area: Tom Hunter’s Down the Lane dates from a time, now disappeared and prior to his professional career, when he had a stall at Brick Lane Market and photographed the passers-by; Diane Bush’s work in the old East End was made whilst working with EXIT, Britain’s first photography collective, which believed in the power of photography to contribute to positive social change; Mike Seaborne’s work at London’s Docklands represents huge social and economic changes in the area and is defined by a vanished post-industrial landscape; and a decade later in the 1980’s, Brian Griffin’s work also comments on massive economic shifts but this time in the City of London where borders were re-drawn as the City spread with the deregulation of the financial markets.