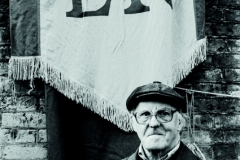 Brick Lane, 1989-1991. These photographs were taken in and around Brick Lane Market in East London. At the time I was fly pitching on the pavements on Sunday mornings, selling items I bought the day before at Jumble sales. The portraits are of my customers. 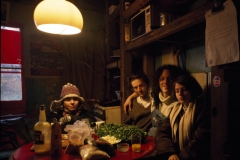 The Ghetto, 1993-1994. The title for the series comes from an article in the local paper, The Hackney Gazette, which described the neighbourhood as “a crime-ridden, derelict ghetto, a cancer - a blot on the landscape.” 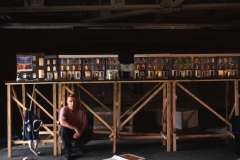 The Ghetto, street model, 1994. This is a 3D photographic model of the squatted street I lived in for 15 years. Its name comes from a Hackney Gazette headline calling my neighbourhood 'The Ghetto' and goes on to describe my home; "The neighbourhood is a crime-ridden derelict ghetto, a cancer- a blot on the landscape. Why would people want to live there anyway? " me and over 100 others, that's who. This work is on permanent display at the Museum of London 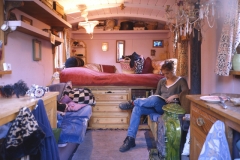 Travellers 1996-1998. These portraits were taken on the road when I traveled and lived in a double-decker bus in England and Europe. In these photographs I set out to not only document the life and times of my friends and fellow travellers but to give our community dignity and illustrate a rich and beautiful lifestyle. 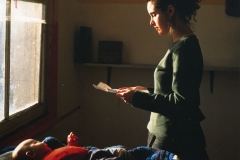 Persons Unknown, 1997. This series of photographs was taken in my street in Hackney. Myself and the residents who made up this community were fighting eviction as squatters. The title of the series comes from the wording used in our eviction orders. The postures and gestures reference Vermeer's paintings and set out to give status and dignity to our community.

Life and Death in Hackney 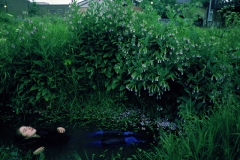 Life and Death in Hackney, 1999-2001. This series of photographs was taken at the end of the last century and the beginning of a new millennia. They show Hackney's post industrial landscape before the Olympics arrived in town. The images make reference to the Pre-Raphaelite paintings, giving a sense of beauty and narrative to a maligned and overlooked place and culture. 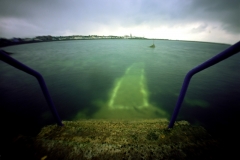 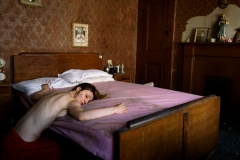 Unheralded Stories, 2008-2009. These images depict the folklore and myths that have built up around my community and surroundings in Hackney over the past twenty-five years. The photographs reference historical tableaux paintings to create striking mythical images which celebrate life by transforming the ordinary into the extraordinary. 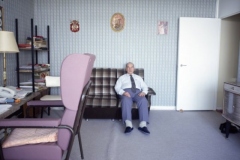 Holly Street, 1997-1998. These portraits were taken of the residents of the Holly Street estate, Hackney, London. At the time this estate was in the process of redevelopment and these images capture the life and times of the tower block residents before their homes were demolished. 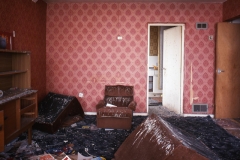 Holly Street Voids, 1998. These photographs were taken on the Holly Street council estate, Hackney, East London. They show the 'voids' (empty flats) after the residents had been evicted, just before three of the four tower blocks on the estate were blown up and the estate was redeveloped.

A Palace for Us 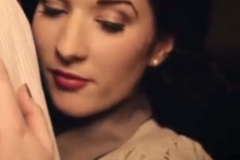 A Palace for Us, 2010. This is a magical film. It weaves the memories of people who grew up in east London and have lived on the estate since it opened into a silvery thread of meaning illuminated by dramatisations of their experiences filmed in the aged, but dignified, Woodberry Down buildings and public spaces. 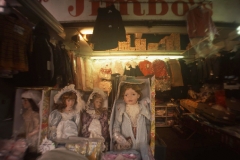 Ridley Road 2010. These large format pinhole images were all taken on Ridley Road Market, Dalston, East London. They celebrate the life and communities of my neighbourhood, shown through the wares and cultures of small businesses. 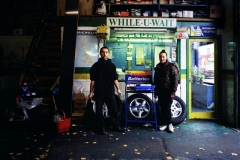 Trading Places 2007-2008. These photographs were taken on Mare Street and Cambridge Heath Road, in Hackney and Bethnal Green, East London. They show a very individual part of London untouched by multi-nationals and chain stores. 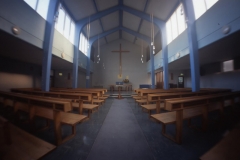 Prayer Places, 2006-2011. All these large format pinhole images have been taken over 5 years in and around where I live in Hackney, East London. They explore the prayer places of different communities religions, cultures and the architecture that makes up this landscape.

Living in Hell and Other Stories 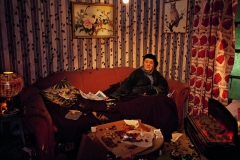 Living in Hell and Other Stories, 2003-2004. This series of tableaux photographs was inspired by Thomas Hardy and the way he interwove newspaper articles from his local paper into his novels. Likewise, I have interwoven the headlines from the Hackney Gazette with classical paintings to produce images that create a lasting social commentary. 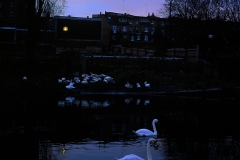 Swan Songs, 2001-2002. These landscape photographs were all taken in Hackney and reveal the way nature and the man made environment that combine and create a unique and mythical beauty. 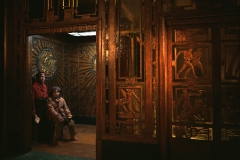 Flashback, 2009. This work blurs the boundaries between fine art practice and documentary by re-examining the history of London using key artefacts from the Museum of London’s collections which illustrate key moments in the history of London. For example, sets such as the 1920’s Selfridges lift and the 17th century Newgate prison cell and costumes such as the 18th century city merchant and a 1950’s nippy waitress outfit. These were then interwoven with people from the wider museum community, such as local schoolchildren, a representative of the Lesbian and Gay cross gender community, board members, museum employees and artisans. By combining and mixing up these three elements I have created unique and surprising portraits, which steal from different times and fashions. This disorientates the viewer by creating a visual jigsaw puzzle, challenging them to make sense of the images, which are clearly at odds with what one expects from period portraits. 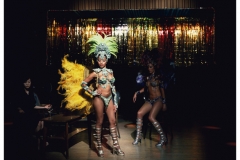 A Midsummer Night’s Dream, 2011. Inspired by Shakespeare’s play and the paintings of Romantic artist Henry Fuseli. This contemporary reworking of the play is set in Hackney, East London and features local people and communities including samba dancers, pearly kings and queens, a thrash metal band and a pole dancer. Taking key moments from the play, I have distilled Shakespeare’s work into a series of images which weave together contemporary city life with that of the celebrated tale of love and illusion. This series of nine works was commissioned by the Royal Shakespeare Company to celebrate their 50th birthday season. 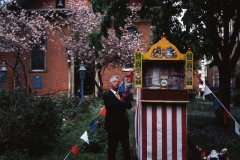 Punch Professors, 2011-2012. England features contemporary Punch practitioners, known since Victorian times as ‘Professors', who for generations have brought the story of Punch and Judy to life with their wit and personality. Specially commissioned for Mr Punch’s 350th birthday celebrations by the V&A's Museum of Childhood, the portraits show each Professor alongside their booth, expressing the highly individual approaches each of them have to their performance. 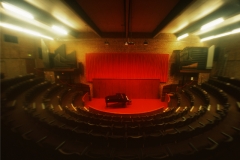 Findings, 2013. Many of the buildings I have photographed are monuments to this industrial past, showing us the fingerprints of working lives and the products that these endeavours have created and from them a way of life and culture. I have always been attracted to these shrines from a disappearing world, a world my grandfather was meshed too, with his engineering company in Birmingham. In this photographic essay, I've connected my history to my country’s and Birmingham. 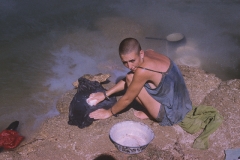 Le Crowbar, 1995-1996. After the Battle of the Beanfield a new breed of travellers took the free festival scene off to foreign shores… In 1995 Tom set off from a squatted street in Hackney with a group of friends in an old double decker bus, loaded with sos-mix, muesli, baby-foot table and a sound system. Fuelled by selling egg butties, veggie burgers and beer, their journey took them through folk festivals in France, tecknivals in Czech, hippie gatherings in Austria and beach parties in Spain. Le Crowbar Café became a staple diet for a nomad party community hungry for all night food and cheesy music, an oasis in a storm of musical madness. Tom’s book paints a vivid picture of friends on a journey, exploring new horizons and ways of living on the road. This book is published by Here Press. 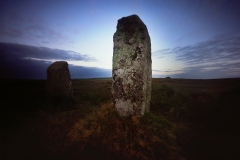 Axis Mundi, 2013-2014. Growing up in Dorset, the ancient landscape always loomed large over my life. Every trip out, whether walking, catching the school bus or just going to the local shops involved driving down a Roman road, passing a hill fort, spotting an ancient burial mound or meeting the Devil’s Stone on Black Hill. 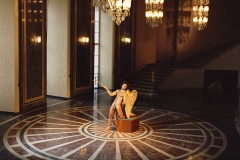 Der Palast, 2019. Berlin Mitte after the fall of the Wall: dilapidated buildings are occupied, the city develops into a melting pot for creative and celebrating people. However, this is accompanied by a cultural flattening that revolves only around the taste of a global, well-off middle class while neighbourhoods change, shops close and people are evicted. Der Palast gives visibility back to the city and its inhabitants. Through an overflowing stage design architecture, mirrored by the worldwide format of reality TV shows and the images of photographer Tom Hunter, who stages social themes in the style of the Old Masters, new narratives evolve between fiction and reality.

Figures in a Landscape 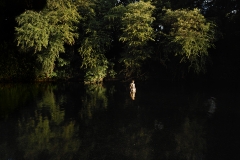 Figures in a Landscape, 2017-2018. This is a personal odyssey which transports the viewer through a world imbued with myths and legends. On this magical journey, from the hillsides of the West Country to the Marshes of Hackney, the viewer encounters ancient gods, goddesses and mythical monsters which inhabit the landscape and battle for supremacy between the other worlds and the here and now. 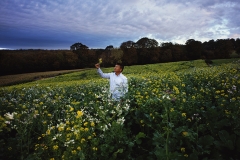 A Journey Home, 2018. Hastings is a coastal town that has many historical layers forged by the flow of its people. To construct a contemporary photographic document of this region, internationally renowned artist Tom Hunter has collaborated with local taxi drivers, whilst referencing the Hastings Museum and Art Gallery collection.