I found this old 4×5 transparency

This is an image I made in Dorset at a place called the ‘Travellers Rest’ just outside of Blandford in about 1993. It shows the interior of an old coach which my friend bought after it was decommissioned from a local bus company. Funnily enough, it was one of the coaches I used to take to school from Bere Regis to Blandford High school so it brought back lots of memories, just being back in that familiar but also greatly changed space. I always love being in these small self contained spaces, it makes me feel cosy and secure, sharing conversation, tea and living in the moment. The family living in the bus were and still are good friends and its great to see the girls have now flown the nest and are making amazing lives for themselves as performers in New York. I’ll have to go back to the Travellers Rest and see what has become of this traditional park up spot, where Romanies and Travellers have made camp on their journeys around the South West of England for generations. 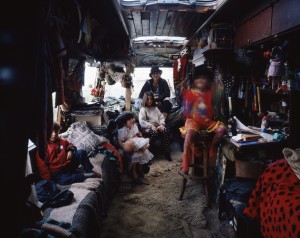