BBC feature of Tom Hunter: a journey through a Hackney landscape 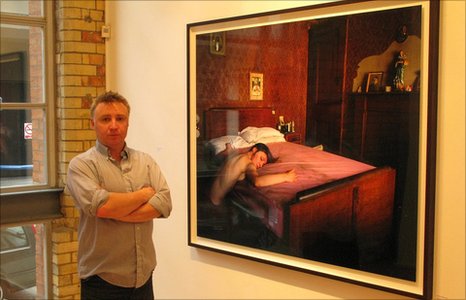 Born in Dorset, Tom Hunter moved to Hackney in 1986. His work has been seen at London’s National Gallery, the V&A Museum and Saatchi Collection

For an artist who plucks his ideas from today’s headlines while looking back to the painterly traditions of the past, Tom Hunter is resolute about one thing.

He seldom strays far from the Hackney, east London neighbourhood he calls home.

In the decade since he first came to critical attention, the photographer’s E8 patch has continued to yield stories and memories which he retells taking inspiration from tableaux painters and old masters.

An early work depicted a young woman reading an eviction order by the light of a sash window in the manner of a Vermeer interior.

In another – from a collection that became the first photographs ever to be exhibited at London’s National Gallery – he transposed Velazquez’s Rokeby Venus to an East End strip club.

Hunter, an affable 45-year-old, designs his work to be puzzling and provocative.

The winner of 1998’s Kobal Photographic Portrait Award describes his large-format images as bleak but ‘familiar and fair, and broadly resonant with today’s society’.

For his new show his goal once again is to put the spotlight on the residents of his home turf.

As he unveils the results of 18 months of endeavour, he told BBC London about the stories behind some of his new images.

This photograph of my friend’s daughter, Roisin, was taken on the edge of Hackney Marshes on the banks of the river Lea. Roisin is underneath a bridge and is looking up as if in hiding from a seeker.

She is also holding on to a giant, triffid-like plant that could inhabit a South American jungle. The plant is hogweed or angelica archangelia in Latin; it is phototoxic which, in terms of my work, is apt. 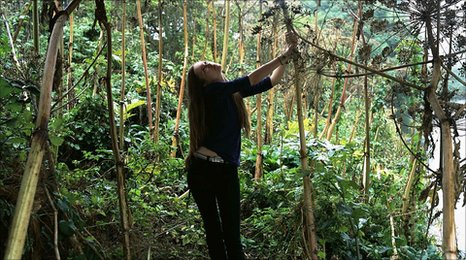 The image was inspired by the painting Roger Delivering Angelica by Jean Auguste Dominique Ingres (1819), which depicts a young woman chained to rocks and being rescued from a dragon by a knight in shining armour astride a Hippogriff.

Although I owe the composition and sense of wonder to Ingres, I feel this contemporary female doesn’t need a knight to defend her or dragon to threaten her. Her battles are her own, within her changing adolescent body, and her demons and saviours are from her own imagination.

I wanted to create the sense of an everyday epic, which in this case began with a story of boating adventures overheard in a local pub.

The title refers to a place where the river Lea cuts into Hackney, and this is a journey from the banks of the Hackney Marsh along the river Styx of Greek mythology. 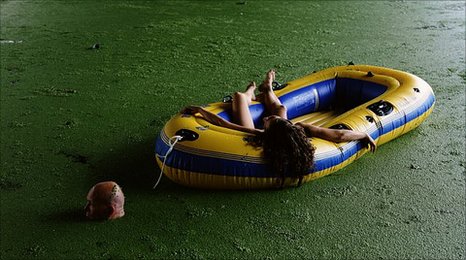 The image shows another friend of mine pulling a boat through a sea of green algae while a woman reclines in her ferry on her epic adventure.

The ferryman, Charon in the original myth, has become Captain Willard, the Martin Sheen character in the film Apocalypse Now, pulling The Raft of the Medusa by Théodore Géricault (1888), from the great marsh to the centre of the underworld.

This is journey’s end in the subterranean underworld of Hades and it shows the ‘mole man’ of Hackney laid out in a hell of his own making.

This infamous character spent years burrowing beneath his house until his forced eviction by Hackney council. 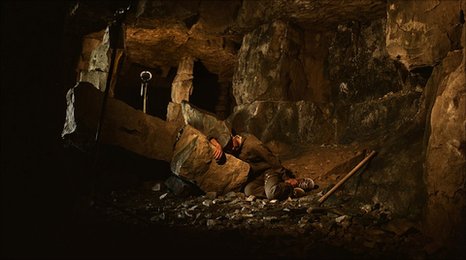 I met him several times and was once invited to view his kingdom: the subterranean world he created caused buses to change their routes in case they were dragged down beneath the tarmac, as Odysseus’ fleet of ships was pulled under the waves by Poseidon after his conquest of Troy.

Sadly the mole man passed away this year, so the work becomes an epitaph to a great life. The composition comes from the painting The Fall of the Rebel Angels by Luca Giordano (1666), which I think speaks for itself.