Tom Hunter is recorded in conversation with Ben Smith for Small Voice podcast, hear it here

Tom Hunter describes himself as an artist using photography and film. He lives in the borough of Hackney in East London, a place which for 25 years has provided both the inspiration and the subject matter for much of his work. Tom is Professor of Photography at the London College of Communications, University of the Arts, London; an Honorary Fellow of the Royal Photographic Society and holds an Honorary Doctorate from the University of East London. He has earned several awards during his career, his latest being in 2016, the Rose Award for Photography at the Royal Academy, London.

Tom graduated from the London College of Printing in 1994 with his work The Ghetto, which was acquired by the Museum of London where it remains on permanent display. He studied for his MA at the Royal College of Art, where, in 1996, he was awarded the Photography Prize by Fuji Film for his series Travellers. In 1998 his picture Woman Reading a Possession Order from his series Persons Unknown, won the Photographic Portrait Award at the National Portrait Gallery. In 2006 Tom became the only artist to have a solo photography show at the National Gallery, London with his series Living in Hell and Other Stories.

Tom Hunter’s work has been exhibited nationally and internationally in major solo and group shows and he has published six books including, Le Crowbar (Here Press 2013) and The Way Home (Hatje Cantz, 2012).

Tom has been commissioned by the Serpentine Gallery London, The Victoria and Albert Museum, the Museum of London and The Royal Shakespeare Company. His works are in many collections around the world including; MOMA, New York, The V&A, London, Tate Modern and The Smithsonian, Washington. 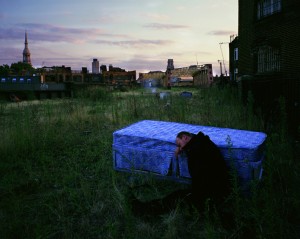 In Episode 72, Tom discusses, among other things:

His current project
Getting out of the ‘cosy bubble’ and going ‘back to basics’
The challenges of returning to B&W after many years of colour
The magic of the darkroom
Being a control freak but welcoming serendipity
Early Success: from Hackney squats to the Groucho Club
Doing the work
The inspiration of Thomas Hardy