Tom Hunter is making a new book with Cafe Royal Books ‘Down The Lane’, featuring his photography taken while working on Brick Lane Market in the late 1980’s 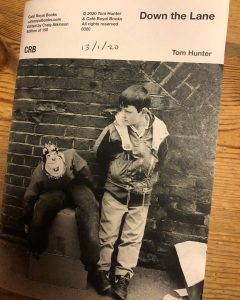 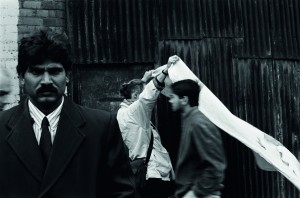 “I made these images between 1989-1990 on Brick Lane market. I had been working as a tree surgeon in Regents Park before I spent 10 months hitching around America. When I returned to Hackney I moved into a squat with Josh and we started selling bric-a-brac down The Lane.

Every week we brought the Hackney Gazette and planned our Saturday like a military campaign to get to as many jumble sales as possible. There were at least 4 every week starting at 10am and ending around 3pm. We knew all the best ones; the church halls with the tastiest baked potatoes for lunch, the Scout Hall with the camping equipment and the treasure troves laid out in St Joseph’s Hospice. We had to be there early to be ahead of the long queues, 10p at the ready, before the doors opened and the charge began. These were no places for the faint-hearted, elbows were out, no airs and graces, ladies grabbing, pushing and shoving, the bargains were there for the taking but you had to be quick with your small change and know what you wanted. The feeding frenzy was over in half an hour and with lamps, 501s and records securely stuffed in rucksacks, there was just enough time for a cuppa before the cycle to the next venue to commence battle again. At the end of the day it was back to the squat to lay out our plundered goods and compare trophies; what would sell and what we would keep for ourselves.
Saturday night squat parties were abruptly curtailed for a couple of hour’s kip before the rude awakening of alarm clocks to get our goods down The Lane. Setting up shop meant getting to the pavement on Bethnal Green road before 6am to grab a place. We had a usual spot but we were fly pitching so being a few minutes late could mean losing it. We laid out our wares on the pavement and hung some clothes from the wall, all the prices in our heads, all our dreams in our hearts. There was just time for a dash along the road, to grab bargains from the other traders, to sell at greatly inflated prices, hopefully!!! It always seemed so cold that first couple of hours standing and waiting for the punters, the cold crawling through our boots and up our legs as the alcohol drained from our blood. But as the punters arrived and the goods start to shift our mood lifted as the sky lightened and our wares shifted. The bargaining and bantering got faster and faster as the clock counted down to 1pm with punters returning to make final offers before the market ended.
Packing up and heading home, counting our takings to keep us in food and beer for another week, before settling down to watch The Antique Roadshow and dreaming of finding that Ming vase at next week’s jumble sale that would set us up for life. Dream on!”