My commissioned photography work will be showing as part of Der Palast dance show in the VolksBühne theatre, Berlin Germany. 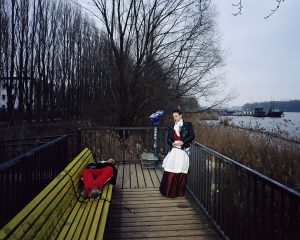 “Everyone knows about the transformation of Berlin’s centre since the fall of the wall: crumbling old buildings were occupied and filled with new life, the city developed into a point of synergy for creative and party people. This shift towards gentrification, however, also seems to come along with a cultural levelling, in which the taste of a global, well-situated middle class takes top priority. Der Palast grapples with this set of problems by, on the one hand, focusing the work on the architecture, and on the other, revealing both the city’s and its residents’ history, present and ideas for the future. Portraits by the English photographer Tom Hunter will serve as the work’s starting point. He presents social topics in the style of the old masters and is developing a series of photographs in Berlin especially for Der Palast. The international format of reality television functions as a counterpart to the architecture. Not only the prototypical characters of the jurors, but also the sets and the participants, are reproduced continually across reality formats. Various guests have been invited to appear in Der Palast within this framework of a reality show. Robert Lippok and a live band are providing the soundtrack.”