The artist will give a talk on his work on March 6th, 1-2pm in the Green On Red Gallery in Spencer Dock. Free. Booking advisable. On March 12th Donal Curtin, Senior Partner, BCK Chartered Accountants and Chairman of the Board of Chambers Ireland will give a talk in the gallery on The Art of Collecting at 6pm. All welcome.

The Green On Red Gallery is delighted to announce the opening of Tom Hunter’s fourth solo exhibition, Axis Mundi & Bathing Places, Dublin Bay, at the Spencer Dock gallery on Thursday, February 19, 6-8pm. The show consists of two separate bodies of work, one made in the last 2 years in the artist’s native England, the other made while on the Artist’s Residency Programme in the Irish Museum of Modern Art in Dublin in 2006.

Axis Mundi & Bathing Places, Dublin Bay are produced in a medium size and photographed using a large-format, pin-hole camera. They are as close as the artist has come to shooting pure, romantic landscape subjects. Nature is seen at its most exposed and elemental, possibly at dawn. The pin-hole camera, like a “ heavenly portal “ lends a drama and distortion that magnifies the subject and lifts it out of the ordinary. The bending horizon, the even grey Dublin light, the pull of the ample sea, the bursting pink light on the English horizon gives both series a timeless and ageless dimension. Heaven and earth are joined in these images in a cosmological declaration.

The mark of man, however, is evident even central to the story of these works. The menhirs are testament to a prehistoric civilisation about which little is known for fact except, on the evidence of its surviving monolithic architecture, that it clung predominately to north Western Europe and parts of North Africa. It is easily imagined as a time of giants, great legends and heroic battles. As a child the artist walked the ancient roads leading to these focal points in the land. But the artist’s more immediate predecessors here are the communities of travellers, revellers and revivalists with their own rites and heroics. 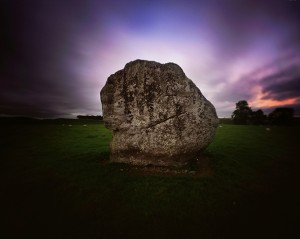 The hand bars, on the other hand, at Sandycove and Seapoint remind us of the invisible community of open water swimmers and another monumental, epic journey which begins with the following description :

Lend us a loan of your noserag to wipe my razor.
A new art colour for our Irish poets : snotgreen. You can almost taste it, can’t you ?
He mounted the parapet again and gazed out over Dublin bay, his fair oakpale hair stirring slightly.
– God, he said quietly. Isn’t the sea what Algy calls it : a grey sweet mother ? The Snotgreen sea. The scrotumtightening sea. Epi oinopa ponton. Ah, Dedalus, the Greeks. I must teach you. You must read them in the original. Thalatta ! Thalatta !. She is our great sweet mother. Come and look.
(Ulysses,James Joyce) 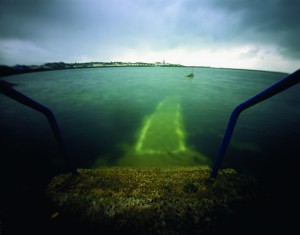